😡😡Movies Will Never Be Better Than Books!😡😡 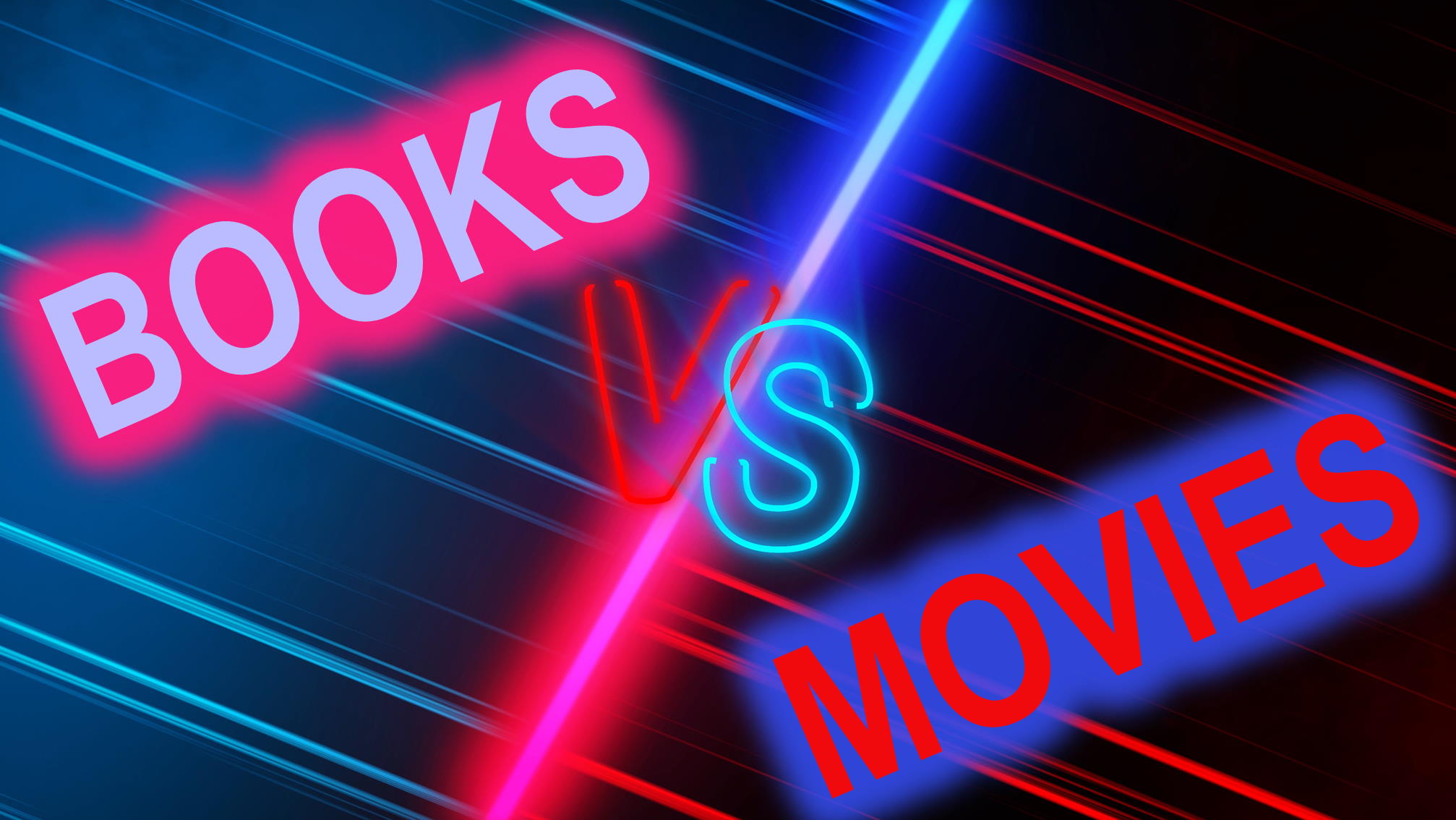 Without fail, whenever a movie or show adapts a book, one of the first complaints out of the mouths of book fans is, “The book is so much better than the movie!” I’ll be the first to admit that I have said that many times, and will probably repeat it at some point. To a reader, I can understand this. When one reads a book, the book comes alive in the reader’s imagination.

The world, the characters, the plot, the dialog—even music at times lights up in one’s brain as one tears through the pages of a novel. Because of this, it might be easy to compare what one imagined from the book to what one sees in a show or movie and think that the book is far superior.

But as I’ve gotten more and more into writing novels and learned more about the craft, I have had to readjust my views on this for several reasons. The tipping point for me was with the recent release of the new series Wheel of Time on Amazon. I wrote a review about that, using the books as a reference point. Even there, I was making comparisons to the books. I found myself wanting the show to be the books in some regard, but then I had to dial it back some and rethink about that position for a moment. While I think I had accepted that it’s true that books and movies are not the same, I looked at it through the lens of an author instead of a reader, and I saw it in a whole new light. Here are some of those realizations.

Perhaps the biggest difference between books and onscreen media is that books rely heavily on the reader’s imagination to interpret the material. As I said, the book plays out like a movie in one’s head, but it is often done in a way that is optimally satisfying to the reader. This makes the experience of a book entirely subjective to the reader. The way I envision a scene or story taking place is not going to be the same as another reading the same book. This may not seem obvious, but in hearing feedback from my readers on my books, it’s always interesting to see how they envision a character or scene. Truthfully, I’m not at all upset when they see a character different from me. Authors understand that readers are as much a part of a novel’s experience as the author themself. Terry Brooks, one of my most favorite authors, helped instill this appreciation in me. Frequently, when he is asked questions about ambiguity in his stories, he usually turns the question back to the asker, asking what they think happened. When they answer, he smiles and nods as a way of leaving it up to the reader to decide.

On the other hand, movies and shows require that the showrunners interpret the material to turn it into a show. This is done through scriptwriting, casting choices, acting, direction, editing, and production. Every person involved in a project has creative input into the process at some level, so the released show is the result of the production team’s interpretation. The watcher, therefore, has a more passive role in interpreting the production. For fans of source material, particularly books, the production will be different enough to think that the production is of inferior quality. They often blame the showrunners for lack of vision or nitpick on the details that they, the viewer, believe the showrunner should have included, excluded, or changed.

I am all for faithful adaptations for books. However, I am usually not upset when the production team takes creative liberties when it works. For instance, the recent adaptation of Dune, while different from the novel, was indeed faithful to the books even if it was not the same as the books. But even so, the movie as a standalone film would have been fantastic in any case. As an author, letting the artistic expression of moviemakers exist as a good movie rather than a bad adaptation of a book has been a growth area for me.

The story unfolds through the lens of the point-of-view character, while movies and shows happen through the camera lens.

On the other hand, movies and shows unfold through the lens of a camera. Sure—a story can be from the main character’s perspective, but it is not the same because, with a movie, things like introspection are harder to show through the lens of a camera. Thoughts and feelings usually have to be shown through dialog and action. Even so, a scene can have multiple characters doing this simultaneously. Perhaps the only way you can get into a character’s head of sort is either through an in-mind sequence, such as a flashback, dream, or through overdubbing. These are occasionally used for effect, but if they were used in the way that authors use introspection, the show or movie would probably grind to a halt.

The difference between books and film may not be as stark a contrast as the first difference I mentioned, but it is enough to make a remarkable difference in the stylistic delivery of a particular story. In either case, though, playing to the strengths in their appropriate context makes for good storytelling in one context but would be awful in another. As a writer, I have to be cognizant that when I am writing a novel, I am not writing a movie script or something to that effect. It works better to have the elements that make for better storytelling for novels, such as a strong point-of-view character, so one can delve into the character’s thoughts and emotions, but not complain about onscreen media when it doesn’t do this.

Stories typically have a plot structure that starts with an inciting incident, rising action towards the climax, a climax, and resolution. Books, television, and movies all follow this basic story structure. But they are all different forms of media, therefore they all tell stories using different techniques or risk losing the audience.

Novels as a media have the luxury of expanding a story over dozens of chapters, wherein the story is a contiguous narrative that progressively builds over the course of the book. This allows the author to stretch out the story. A typical novel is usually around 90,000 words, taking and average about 5 hours to read with science fiction and fantasy being longer. A longer form allows for more breadth of content and more depth of characters and themes.

Movies typically are between 1.5 to 2 hours in length. They, therefore, do not have the longevity of books to explore the breadth and depth that even an average novel does. When a movie adapts a novel, it’s usually compressed to make the novel more approachable. This may involve excluding scenes, subplots, or eliminating characters altogether. For lovers of a particular book, this can be a turnoff because the reader feels like they were shortchanged in a way. One notable exception, though, was Peter Jackson’s adaption of The Hobbit. Because he took a novel and told it over three movies, it needed expanding. Denis Villeneuve’s adaptation of Dune seems to be following a similar pattern by using multiple, long movies to explorer a single book. The product is a more faithful telling of the story. These are the exception though. In contrast, the animated version of The Hobbit or David Lynch’s adaptation of Dune severely compressed the content.

It might be tempting to think that shows have more latitude than movies to adapt a book because they are not bound to a couple of hours. Shows, though, have another problem in that they are episodic. An episode of a show requires that each episode follow a cohesive story structure on a per-episode basis with an inciting incident, rising action towards the climax, a climax, then a resolution within the episode. In many book adaptations of shows, the episodes are crafted to support a season-long story arc, but are self-contained. The compressed nature of episodes, typically 45-50 minutes in length, makes showrunners create stories within a story. They use some of the same techniques that moviemakers use, like dropping subplots, eliminating characters, and other adaptations. This can be disruptive for some lovers of books.

The bottom line—shows, movies, and novels are all different storytelling media and therefore have different parameters and expectations. It is, therefore, unrealistic to expect that one follows the other in their respective adaptations. It’s best to appreciate the art format for what it is and judge it on its own merit. Sure, it’s okay to expect a faithful adaptation of one media to the others. At the same time, one needs to adjust expectations that shows and movies will be the book. Any changes made are probably more out of a need to accommodate the target media than it is to make lovers of a book mad.