Planning a Story Part 2 – Conflict In A Story

Conflict is the engine that propels a story forward. It’s what gives the story stakes and develops the characters as they face struggles. In a story, conflict falls into two broad categories: internal conflict and external conflict. While these two are not necessarily distinct, it is helpful to think about these things in these categories because they impact characters and development differently, and the impact of one affects the other.

Writing a story with internal conflict develops characters and makes them round. While my stories will typically start around an idea related to a premise or theme, how that premise or theme impacts the characters is what makes the characters come to life in the story. As I plan a story, I consider how the events that unfold in the plot impact each character and try to think about how even the characters’ reactions will impact other characters. This can give new angles for subplots, character development, and more nuanced conflict.

External conflict is a broader category that includes many other kinds of conflict in a story.

The next kind of external conflict is conflict between characters and impersonal forces. These, however, are not as likely to develop in the same way that character conflicts have with interpersonal and internal conflict. The forces are derived from the world or settings and create stakes for the characters to overcome.

Factions – The first of these would be factions. Factions are composed of people but are typically treated as a class of people rather than as individuals. Factions can be cliques, gangs, political factions, races, or any other group that might struggle with another group. It is possible to use a character as an example from a faction, but that character will also have their own motivations, thoughts, and desires. But the conflict between forces or between a character and a force can create overwhelming odds against the character, create in-group or out-group dynamics that a character struggles with, or serve as the background setting and conflict where interpersonal conflict emerges.

Natural Forces – The second force is a natural force. This is a common motif in survival stories, disaster stories, or even in subplots where characters have to contend with something about the natural setting. I have used these in my own writing to shape survival elements or help a character discover something about themselves through tension and struggles brought on by the environment. Natural forces manifest themselves as natural disasters, the elements like fire, heat, the cold, an arid region, or even animals or monsters that are a part of the natural world.

Supernatural Forces – The third force is the opposite of natural forces, namely supernatural forces. Supernatural forces are like natural forces in some ways but with fantastical elements. One is likely to find these in fantasy or horror writing that commonly integrates such things. These manifest themselves as magic, gods, spirits, fantastical beings, and magical forces. Because these are part of a created world, they may be as much a part of the “natural” world in fiction. However, sometimes that is independent of the seemingly more natural elements in the story. When writing supernatural forces, though, these need to be tempered in a way that prevents the magic from becoming the solution for every problem. One way to do this is to make using magic have consequences or tie the use of magic to some physical constraint that prevents it from becoming too powerful.

I like to use a conflict graph to illustrate conflict in a story. On this graph, the relationships between characters and forces are shown visually by creating circles and lines. The circles represent characters and forces. The lines represent the relationships between the forces. I color coordinate the lines to show degrees of conflict. Red is extereme, yellow is less extreme, and green is amicable. 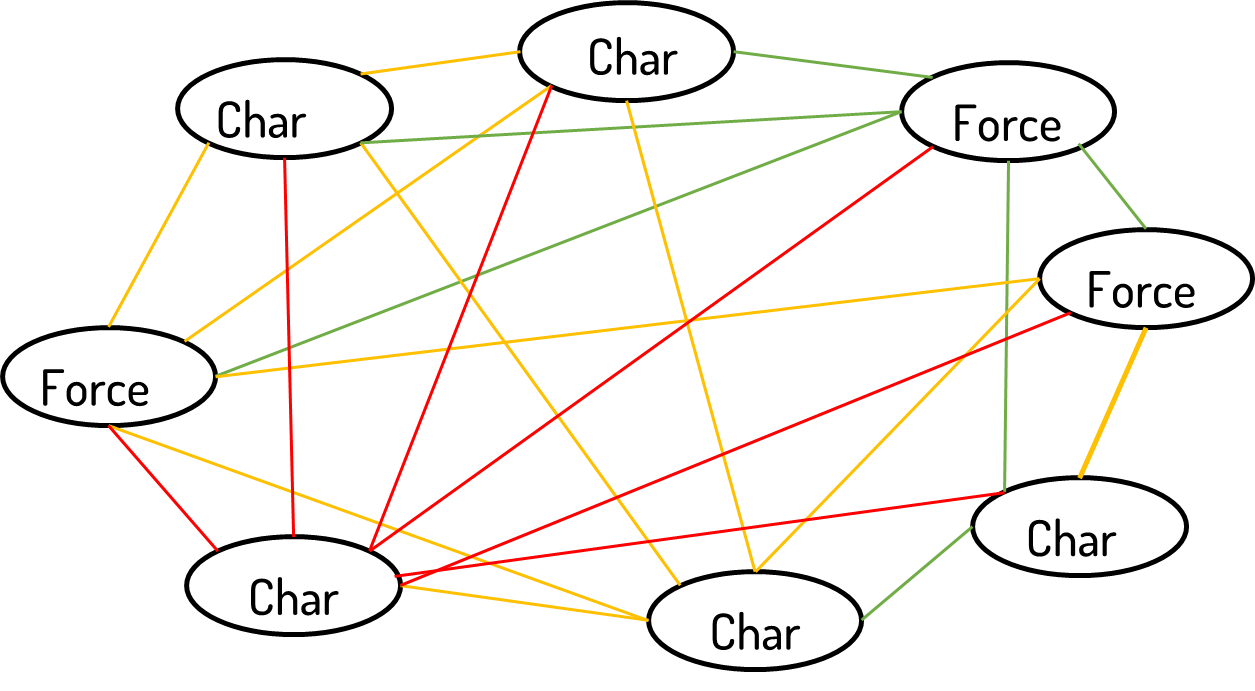 Here’s a video on how to develop one of these:

This visualization works for external conflict but not as well for internal conflict. For that, I like to see a character’s arc played out using the plot-character matrix, which describes character interactions with one another in reference to plot points of a story and the internal thoughts, feelings, emotions, and development of each character in their arc.

These tools, along with other tools, help create a compelling story with layers of conflict that make the characters more interesting and the plot more compelling than just something that revolves around a central conflict in a story.